Below are our top 10 stories that you need to know about. Be sure to check our twitter page and Facebook page for regular posts of important headlines. Get all the important stories and insights straight into your inbox by subscribing to our mailing list here.

The UK is looking to change tax laws and this may have a big impact on big tech companies. The government is planning to tax companies on their revenues rather than profits. A review declared this as “the preferred option” following widespread concerns that big companies do not pay enough tax. There will be consideration of smaller businesses before implementation.

Many companies such as Facebook and Apple, can divert sales booking through lower tax jurisdictions such as Dublin. Google posted revenue of £1 billion in the UK but a pre-tax profit of £149 million. There are concerns however, that this move could simply lead to companies restructuring and paying the majority of their tax in different jurisdictions.

The Financial Times explores the tax issues for big tech.

This came as, Unilever issued a threat to Facebook & Google to “drain the swamp” of extremist content and fake news otherwise they would pull their adverts. (CNBC)

Barclays suffered a £1.9 billion net loss after facing a plethora of issues. Despite, posting a 10% rise in pre-tax profit to £3.45 billion, the bank took a number of one-off charges. The bank sold its poorly performing African arm, suffering a £2.5 billion hit. Trump’s new tax measures also saw them absorb a £901 million charge. Business Insider looks at some of the other issues facing the bank.  Barclays also won the first round in a legal dispute with a credit card company.  (City A.M)

RBS posted their first profit in over 10 years. The bank is still 72% owned by the tax payer. The bank made a profit of £752 million in 2017, compared to a £7 billion loss in 2016. While this is certainly good news, there are some troubling times ahead. RBS still faces investigation relating to mortgage backed securities and the last batches of PPI cases (deadline in 2019) which are both likely to bring hefty charges. (The Guardian)

Metro Bank posted its first annual profits as its expansion plans pay off. The challenger bank posted a £18.7 million pre-tax profit while its assets and loans grew by over 60%. (City A.M)

Bank of America has extended its London lease for another 10 years. This is a firm vote of confidence in post-Brexit Britain although job moves are still planned. In July 2017, the bank confirmed that it would be moving its EU base to Dublin post-Brexit, with some roles moving too. (City A.M)

Natwest are also testing new technology which involves using a “digital human” to speak with customers and deal with queries. This raises concerns that banks could soon replace tellers with artificial intelligence. The digital human is called Cora and can answer a number of simple verbal questions. The technology should soon be able to detect human emotions and expressions. (The Guardian)

KFC was forced to close hundred of outlets after deliveries of chicken were not fulfilled. The fast food retailer changed its delivery contract to DHL but operational issues meant deliveries to all 900 outlets were coming from one depot. Over 600 stores were closed and staff were encouraged to take their holiday but not forced to do so. KFC have set up an emergency website to inform customers which stores are open. There losses the company will have suffered have not been calculated but KFC issued a colourful apology in the Metro (see below).

BBC News looks at the closures. 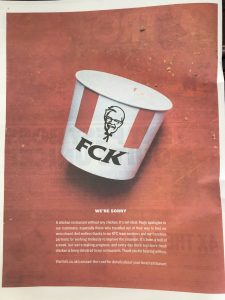 Venezuela has launched its own Cryptocurrency in an apparent bid to save its faltering economy. “Petro” is a cryptocurrency backed by Venezuela’s oil reserves. Venezuela has the largest oil reverses in the world. This will be the first sovereign cryptocurrency . 100 million Petros will be sold with an initial value of $60 (based on price of Venezuelan oil in January). The token pre-sale raised over $735 million in the first day, which was deemed encouraging by the government.

The US has imposed crippling sanctions on the country including complete prohibition on lending to the nation. Critics claim the ICO is an illegitimate way to raise funds and circumvent US sanctions. Combine sanctions with corruption and other factors and you have a recipe for disaster.

Venezuela currently has over $150 billion worth of foreign debt but is struggling to pay back. It technically defaulted on one of its bond repayments last week. Inflation in the country stands at a staggering 13000%.

BBC News reports on the launch.

For the first time, Amazon is worth more than Microsoft. Jeff Bezo’s Amazon seems set on world business domination as the company’s  market cap hit $702.5 billion. This surpassed Microsoft’s $699.2 billion. The only companies larger than Amazon are Apple and Alphabet.

Both Amazon and Microsoft are set to compete in the cloud sector although Amazon appears set on competing in every sector. They made their mark in the grocery sector with their $13.5 billion acquistion of Wholefoods and the opening of checkout-less Amazon Go. In addition, they have teamed with Berkshire Hathaway and JP Morgan with plans to develop their own healthcare company.  Amazon has recently invested billions worldwide in its relentless growth ambitions. It will be interesting to see if all of these investments will pay off. (CNBC)

Siemens has announced plans to launch an IPO, selling shares in its healthcare business. Siemens Heathineers will list on the Frankfurt Stock Exchange before mid-2018 and is expected to be valued at up to $50 billion.  Siemens will retain a majority stake in the company. Siemens Healthineers has a turnover of $17.4 billion and employs over 47000 people globally.

This valuation will make it one of the largest IPO’s in Europe in over half a decade. Glencore’s dual-listing on the London and Hong Kong stock exchanges in 2011 was the last big money IPO. Glencore was valued at over $60 billion. CNN explores Healthineers IPO plans.

The European Court of Justice denied a pregnant woman’s claim against her employer regarding her dismissal from her job, despite protections under EU law. Jessica Porras was pregnant and a former worker at Bankia in Spain but was dismissed in 2013. She brought a claim forward against her employer and the Catalonia high court referred the case to the ECJ.

EU law prohibits dismissal of a pregnant woman, only allowing a few exceptions under national law where dismissal is not connected to the pregnancy.  In this case however, the dismissal was not connected to her pregnancy and was part of wider job cuts throughout the company. Porras was informed of the reasoning for the cuts prior to her dismissal. Bankia was bailed out by the Spanish government in 2012. BBC News looks closer at the case.

Snap’s market value crashed by $1.3 billion due to a single tweet by celebrity Kylie Jenner. She tweeted “sooo does anyone else not open Snapchat anymore? Or is it just me… ugh this is so sad.” This tweet went out to her 24 million followers and Snap’s share price fell as much as 8% in the day. Kylie Jenner is one of the most influential figures on social media with over 100 million followers on instagram. She is the half-sister of Kim Kardarshian.

Snap’s price had however, already been falling as a result of their update. Snapchat recently updated their app but it has been fiercely criticised. Over 1 million people have signed a petition for Snap to reverse the update. In addition, over 80% of app store reviews have been negative. (BBC News)

Snap has not made a profit in its entire history. It posted a loss of over $720 million in 2017. Despite Snap’s poor performance, CEO Evan Speigel took home the largest salary of any CEO in the US. He took home a whopping $638 million in stock and compensation payout in 2017.  (Business Insider)

Black Panther had one of the best opening weekends in film history. In the US and Canada box office ticket sales reached a staggering $242 million. This makes the second highest grossing opening over four days ever, just behind Star Wars: The Force Awakens. It also had the second biggest Monday sales in history, again behind the same Star Wars film.

The film also took over $100 million in its second weekend becoming only the fourth film in history to achieve this. Again, Star Wars: The Force Awakens is the only film ever with a better box office haul.

The film has a largely black cast and has gathered support from the likes of Michele Obama because of this. It currently has an exceptionally high rating of 97% on Rotten Tomatoes, a film review website. BBC News looks more at some of the reactions to this ground-breaking film.

Toy R Us is desperately seeking a buyer. It is facing a £15 million VAT bill and it must find the money imminently or it may fall into administration. No agreements have been reached yet although talks are currently ongoing.  The company has already planned to cut up to 800 jobs. Toys R Us employs over 3,000 people in the UK. For more on the plan read Sky News’ report.

The Pension Protection Fund has informed Toys R Us that it must not appoint Alvarez & Marsal (A&M) to advise on any insolvency proceedings. A&M are their existing advisors but the PPF are not comfortable with the firm handling Toy R Us’ administration proceedings. Sky News looks at this decision in more detail.