After several months of threatening to impose widespread import taxes (tariffs) on China and its alleged unfair trade practices, on 6th July, the President of the US carried these threats into action and implemented tariffs on $50 billion worth of Chinese products and threatened tariffs on $467 billion more. Today the total amounts to $250 billion. In retaliation, China has matched these tariffs dollar-for-dollar as well as threatening measures that will affect US businesses operating in China.

Globally, this issue is being widely reported as an all out ‘trade war’ between Chinese President Xi Jinping and US President Donald Trump. China’s own Ministry of Commerce warning that it may lead to “the largest trade war in economic history to date.” A recent proclamation from US secretary of state Mike Pompeo was, “The trade war by China against the US has been going on for years. Here’s what’s different in this administration . . . we are determined to win it.”

Three rounds of tariffs- what are they?

US implements first China-specific tariffs and US Customs and Border Protection (CBP) begin collecting a 25% tariff on 818 imported Chinese products valued at $34 billion.

The symbiotic relationship of the two countries means that the immediate impact of the tariffs is that prices for US consumers will most likely go up and Chinese exporters will suffer from lower orders and economic growth rates of both countries will be under pressure. The US has announced that it will be taxing machinery and tech, both areas that are important to China’s growth. China retaliated by announcing import tariffs on products in major US sectors such as aircrafts, cars, soybeans, whiskey, cigars and tobacco. This means that sales of the American Champion Jack Daniel’s could suffer. Whilst in many areas, we are still looking at ‘potential threats’ of this trade war that have not yet come to fruition, there are some examples where the fallouts are being felt.

Effect of US and China tariffs on US companies and consumers

Many companies have warned that Trump’s tariffs threaten to disrupt their businesses and depress their revenue. The monthly manufacturing index by the Institute of Supply Management noted that some companies have expressed concern about tariffs despite an otherwise robust US economy.

So far, the stock markets have taken the threats of tariffs in their stride. Share prices have dipped, only to then resume their growth, in part because of deep corporate tax cuts that took effect this year and a solid US economy in its tenth straight year of expansion.

However, global companies such as Apple and Lenovo invest in both China and the US. These companies will face higher costs to produce iPhones and ThinkPad laptops, a cost which most likely will be passed on to American consumers.

Dialog Semiconductor, the chipmaker that Apple is investing $600 million into, is monitoring the trade conflict closely. The CEO noted that many companies in the electronics space have supply chain exposure to China, but added that there were no current signs of impact on Dialog’s business operations. However, he warned that like most international businesses, they will have to continue to watch carefully on how the tariffs may continue to rise.

The world’s largest luggage maker, Samsonite International said that the trade war was starting to affect its business in the Asian region. Sales in Asia, which account for roughly a third of the company’s business, were up 14.4 per cent for the first six months of the year. But Samsonite’s new chief executive warned that the trade war was damping consumer sentiment and is set to hurt spending.

Businesses who need steel and aluminium for the goods they produce will want to avoid their bottom lines being hurt too much, and so they are likely to pass some or all of the costs on to consumers. Likewise, retailers such as Walmart import goods from China, so a surge in prices would result in a squeeze on US consumer’s living standards. These US goods are also sold worldwide, which means that consumers in the rest of the world, including the UK, would also be affected. The same applies to Chinese consumers and producers with half of Chinese exports made by enterprises with foreign investors.

In the South American country of Brazil, the trade war is already having an effect. China has become the world’s largest importer of soybeans, the crop is largely turned into animal feed, oil and soy sauce. China previously had a 3% tariff on US imports of soybeans, however, since the import tariffs have been raised to 25%, China has turned to Brazil for the crop. In some ways, Brazil has won big here, with the prices of Brazilian soybeans surging to more than 30% of what they were last year. However, this has left domestic supplies of the crop dangerously low. Exports to China hit 54m tonnes in the first eight months of the crop year from February, already up more than 10% over the same period in 2017. 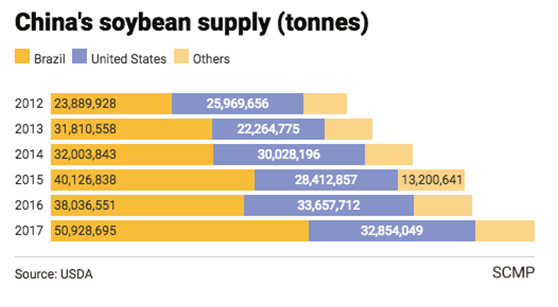 With China historically importing about a third of its soybeans from the US, where it is mainly grown in the Midwest, the global industry has found itself caught up in the escalating trade war between the US and China. US farmers are feeling the impact as soybean prices have plunged. 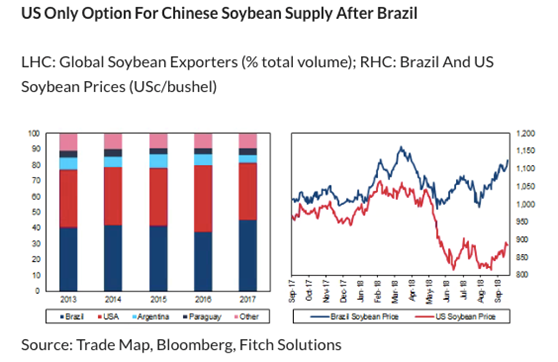 Not only are US sales of soybeans down from the same period of last crop year with shipments of soybeans 13% behind the year-ago pace. Canada has also suffered a decline in its soybean business with China. 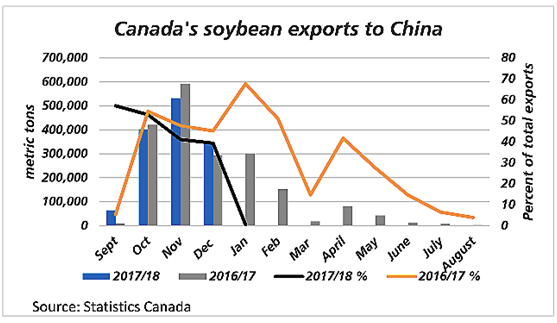 As seen on the above chart, Canada’s total exports to China in January were 1,357 metric tons (blue bar), down from 300,889 metric tons shipped in January of 2017 (grey bar). While one month’s data does not make a trend, China went from being Canada’s No. 1 customer in December to No. 16 in January.

A prolonged trade war between the US, the world’s largest economy, and China, the second-largest, would undoubtedly affect the rest of the world. Tariffs could translate into less trade, which could hinder growth in smaller nations, or as we have seen in Brazil, it could affect smaller countries own domestic supply chains.

Supply and distribution chains are a key part if world trade, meaning that any disruption could have an enduring impact. Whilst tariffs can be reversed, in a worst-case scenario, companies may have to relocate their factories and distribution centres.

The US dollar has already begun to rise in value as trade tensions have mounted. This has insulated the United States from higher prices. However, it has also weakened the value of emerging market currencies, heavily affecting their economies. In the meantime, the value of the Chinese Yuan has dropped relative to the dollar, making it easier for China to withstand US tariffs.

Overall, the effects of the trade war will need continuous monitoring in order to determine the full extent of its impact.