Below are our top 10 stories that you need to know about. Be sure to check our twitter page, Facebook page and Instagram Page, for regular posts of important headlines. Get all the important stories and insights straight into your inbox by subscribing to our mailing list here.

Its been another tumultuous week in Parliament. Boris Johnson lost crucial Parliamentary votes sending his Brexit plan into a tailspin. Crucially, Parliament voted to block a no deal Parliament. The law would force the government to see an extension to the Brexit deadline if no deal is reached by 19 October. Boris Johnson subsequently expelled 21 MPs from the party for their rebellion. This included some party heavyweights including Philipp Hammond, Ken Clarke, David Gauke. This is significant as now the government has no majority in Parliament and cannot pass any legislation.

Following this, Parliament also voted down Boris’ attempt to call an early general election on 15 October. Labour have said they will only accept a general election if the PM delays Brexit. In response, the PM said he would rather be “dead in a ditch” than request further delay. The PM’s own brother, Jo Johnson quit as a Tory MP and a minister as he could no longer support Boris’ Brexit plan. Parliament will get another opportunity to vote for an election this week but a change of heart amongst Parliamentarians is highly unlikely. Amber Rudd also quit Boris Johnson’s cabinet as she claimed the government are not having any formal negotiations to secure a revised Brexit deal.

There are numerous ways for Brexit to go , BBC News explains what could ow. See BBC’s flow chart for the potential options. 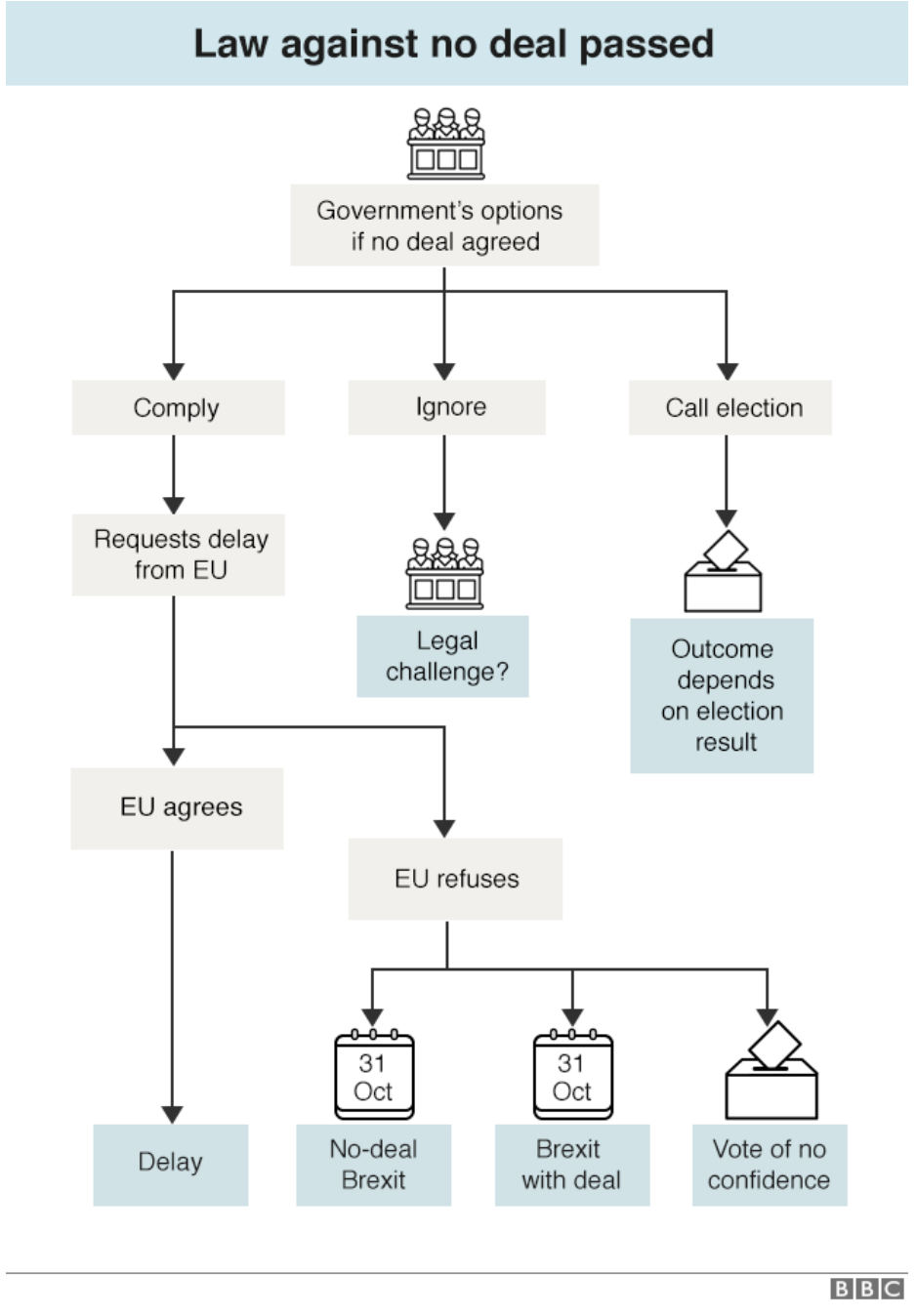 US state officials have launched an antitrust investigation into Facebook. 8 states have come together to launch the investigation into Facebook’s practices, alleging that Facebook is stifling competition to the detriment of consumers. Officials will investigate whether Facebook’s actions are uncompetitive and reduce the quality of choices. Facebook claim that they are not a monopoly and users have numerous other ways to connect with friends.

The US Federal Trade Commission is already investigating Facebook for anti-trust breaches. Regulators are now seeking to catch up with big tech, who have grown to dominance under the radar.

3. MARKS & SPENCER FALLS OUT OF FTSE

Marks & Spencer has been booted from the FTSE 100 for the first time in its history. The high street retailers share price has plunged 40% this year and sales have been weak across the board. It’s core income is from its clothing division and sales have dropped drastically over the past few years. The retailer isn’t able to keep up with the market, which has shifted heavily to online sales and now Marks is paying the price. The ejection from the FTSE will take effect on September 23rd. Marks and Spencer was one of the original FTSE 100 members when the index launched in 1984.

The PPI deadline passed on August 29th but an unexpected surge in last minute claims is hitting banks’balance sheets. RBS had set aside £5.3 billion to cover PPI compensation claims but the bank has said it is likely to take up to £900m in additional charges due to the surge. Santander’s online complaints form stopped working and the bank was forced to extend its claim deadline.

Banks mis-sold payment protection insurance, mainly between 1990 and 2010. The insurance covered loan repayments where borrower’s income fell due to illness or losing a job. PPI was sold however, to consumers who did not request them or need them. Consumers were entitled to compensation and numerous PPI claim management companies were born. The FCA set a deadline to bring the saga to a close as evidence for claim cases grew stale. In total however, £36 billion in compensation has already been paid out.

Netflix has been sued for copyright infringement for its Fyre Festival documentary. The document “Fyre: The Greatest Party That Never Happened” tells the story of the failure of a luxury festival in the Bahamas and the subsequent fallout. Co-producer of the documentary was Jerry Media who allegedly stealing some of the videos used in the documentary. Festival goer, Austin Mills, recorded his ill-fated experience and shared the video on his YouTube is one of those who alleges much of his content was stolen and used in the documentary. While Netflix did approach him to license the use of the video, no final agreement was reached. Mills is now seeking injunctive relief to prohibit Netflix from using his videos and monetary demands for the copyright infringement. If successful, Netflix would have to edit the documentary to remove the content and pay damages and profits.

The Competition and Markets Authority has suspended its contempt of court action against Viagogo. The ticket sale website had allegedly failed to comply with a legal order to improve its practices. Viagogo failed to display seat numbers, misleading customers about availability leading to some customers being turned away at the door. The CMA now says the Viagogo has made sufficient steps to address the issues and now the service is far more transparent. The CMA has however, threatened further legal actions if such issues resurface. Viagogo’s compliance with the court order be reviewed again in October 2019.

Ariana Grande has filed a $10 million trademark lawsuit against Forever 21. The singer alleges the company and beauty company Riley Rose using 30 unauthorized images and videos of her to promote its brand. The use of the images allegedly deceived customers into thinking Ariana Grande endorsed their products. Grande alleges they used a similar looking model and lyrics in her “7 Rings” song in an advertising campaign. Grande recently turned down a joint ad campaign with Forever 21 because they weren’t offering enough money. The lawsuit is another headache for Forever 21 who are reportedly preparing to enter Chapter 11 bankruptcy.

Talks between law firms Allen & Overy and US headquartered O’Melveny & Myers, for a multibillion merger have fallen through. The firms recognised that there were “compelling synergies” but mutually agreed not to continue discussions. A merger between the two would have given magic circle firm Allen & Overy a substantial foothold in the US, one of its key growth areas. The firms have said they are open to exploring other synergy opportunities in the future. The combined firms would have 3000 lawyers worldwide with over £2 billion revenue.

British Land is taking legal action against Monsoon Accessorize’s company voluntary arrangement (CVA). Creditors approved the CVA in July and will see rents be cut as much as 65% across over UK 100 stores. British Land owns 5 of Monsoon Accessorize’s properties. The company felt the legal action was the last resort to block the CVA. Landlords were strongly opposed to the CVA particularly the new funding structure and felt their concerns were not listened to. Monsoon’s CVA however, does not include plans for store closures unlike many typical CVAs.

Christian Louboutin has won an EU trademark dispute against Amazon. The victory now prohibits Amazon’s EU entity from selling purely red soled high heel shoes, the signature of trademark of Louboutin. Louboutin alleged Amazon EU failed to ensure counterfeits on its platforms. Amazon’s advertising system promoted over 100 counterfeit Louboutin footwear as “sponsored products” in just 3 months. The court found in favour of Louboutin and confirmed Amazon was liable even for third-party vendors selling counterfeits on its site. As well as refraining from offering any counterfeits on its platform and $50 per day penalty for non-compliance with a cap of just over $55 million. The Fashion Law closer at the case.